On Wednesday, October 30th, 2019, Adrienne Cohen and Julie Ursic of the Law Offices of Adrienne D. Cohen won an appeal on a coverage case, overturning judgement in favor of San Diego Joint Powers Authority. This judgement settles the question in California of the jurisdiction of the Superior Court in coverage cases involving excess workers’ compensation insurers. This is the first state case that articulates the rule of law followed in federal court and the Workers’ Compensation Appeals Board (WCAB). 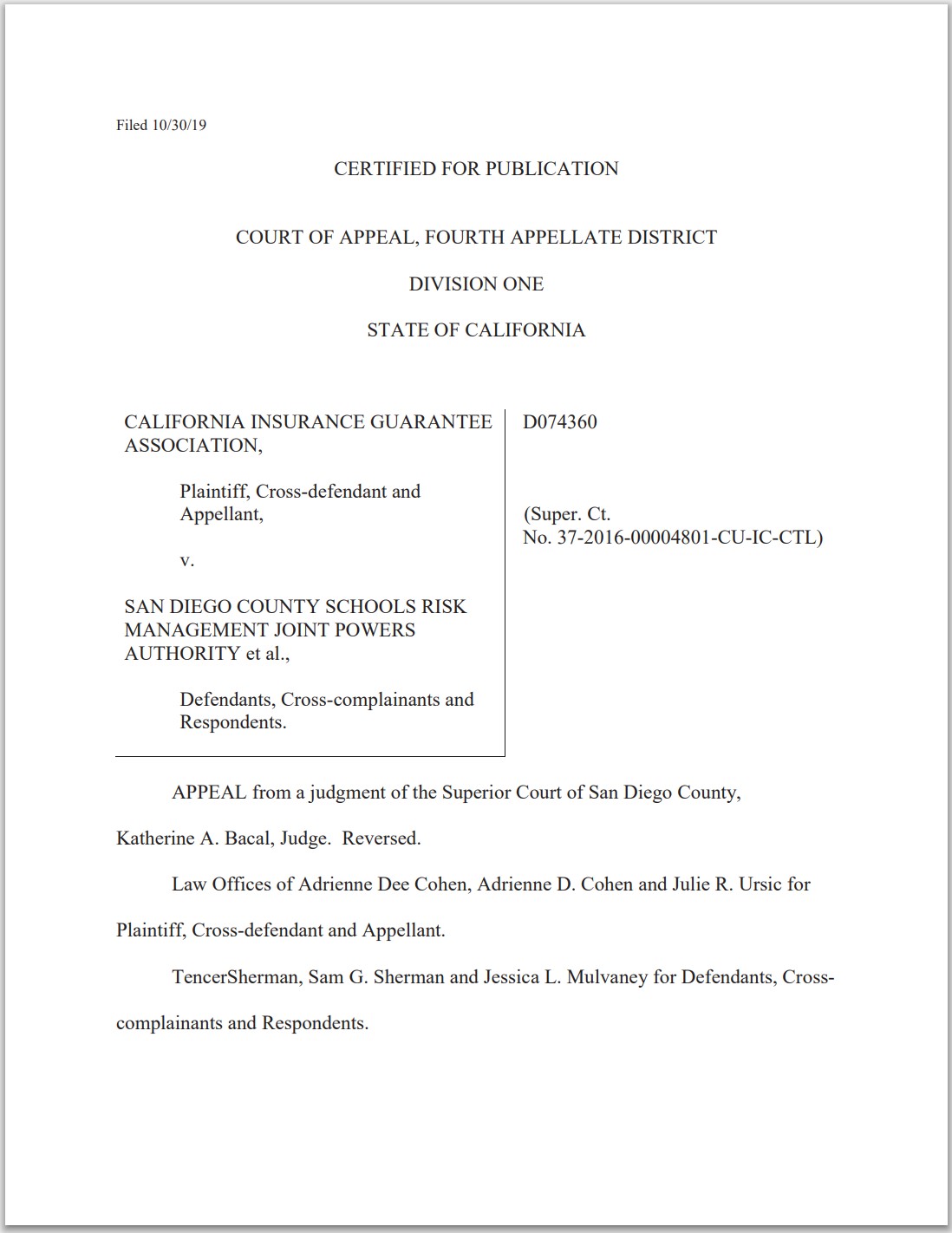 On October 30, 2019, the California Court of Appeal, Fourth District, Division One decided California Insurance Guarantee Association v. San Diego County Schools Risk Management Joint Powers Authority, D074360, a case of first impression, reversing the trial court’s entry of judgment in favor of San Diego JPA and vacating the orders granting Summary Judgment. The Court of Appeal determined that the Superior Court has jurisdiction to determine characterization of injury as part of a coverage action where the question of coverage involves allocation among excess workers’ compensation insurers and reimbursement of a self-insured employer by an excess workers compensation insurer, in this case, CIGA, who had been administering the claim on behalf of the insolvent excess carrier. Because the determination of coverage involved excess workers’ compensation insurance and therefore had no effect on the compensation paid to the injured employee by the self-insured employer, following prior decisions by the 9th Circuit and the WCAB, the Court of Appeal determined that the coverage issue, including determination of injury, was outside the WCAB jurisdiction and should be adjudicated by the Superior Court. The Court relied on Parkwoods v. Community Assn v. CIGA (2006) an appellate matter successfully argued by this firm, and held that the self-insured employer could not cut off access to “other insurance” by stipulating to a specific injury in the WCAB and then argue that no there is no “other insurance” available under Insurance Code 1063.1 et seq. This decision settles the question of law in California regarding the Superior Court’s jurisdiction over coverage matters involving excess workers compensation carriers and has been certified for publication.